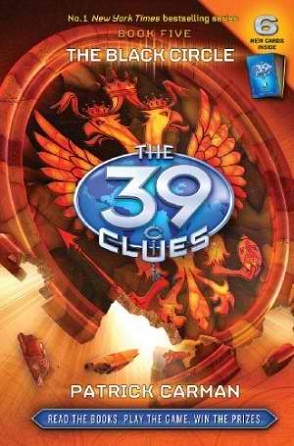 My son and I have been reading the 39 Clues series together.  The one thing that I have enjoyed about this series is that it is historical fiction, so I feel like he is learning something while enjoying the fictional elements of the story.  In the fifth installment, Amy and Dan are off to Russia in search of their next clue.  This time we learned about the Romanovs, which was the Russian royal family.  They focus mostly on the Romanov children Anastasia and and Alexei.  We also learned about Rasputin and his involvement with the Romanovs.

It was very coincidental, but my son was learning about Rasputin and the Romanovs in school while we were reading this book.  In addition, my step-dad suggested that I start listening to these "Remarkable Lives, Tragic Deaths" podcasts.  When I pulled them up, the first podcast was about Rasputin, so I feel like quite the expert after this comprehensive history lesson.

Amy and Dan were forced to work with their cousins, the Holts, in order to accomplish this mission.  The clues were spread out all over Russia and there was no way any one team could collect all of them on their own in the designated time frame.  Amy and Dan continue to receive help from the unknown "NRR" .  We finally find out who NRR really is, which was a major surprise.  I don't want to give away any spoilers, but it wasn't who I thought it was all along.

The Kabras trail the Holts and Irina Spasky mysteriously turns up in places Amy and Dan are searching.  She is definitely working against them, but at one point it seemed like she was genuinely concerned about their safety and offered them a warning.  Of course, the kids took it with a grain of salt and continued on with the quest.

Their final discovery appears to be leading them to Australia.  I can't wait to see what we will learn about Australia in book 6.
Posted by Jacque at 8:29 AM

Email ThisBlogThis!Share to TwitterShare to FacebookShare to Pinterest
Labels: 39 Clues