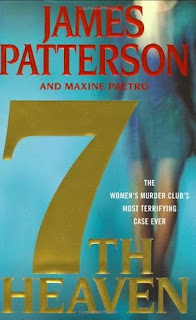 A terrible fire in a wealthy suburban home leaves a married couple dead and Detective Lindsay Boxer and her partner Rich Conklin searching for clues. And after California's golden boy, Michael Campion has been missing for a month, there finally seems to be a lead in his case--a very devastating lead.
As fire after fire consume couples in wealthy, comfortable homes, Lindsay and the Murder Club must race to find the arsonists responsible and get to the bottom of Michael Campion's disappearance. But suddenly the fires are raging too close to home.
Frightened for her life and torn between two men, Lindsay must find a way to solve the most daunting dilemmas she's ever faced--at work and at home.

This is the 7th book in the Women's Murder Club series.  In this installment the ladies are working to catch a serial killer or killers who are targeting wealthy couples.  Robbery doesn't appear to be the primary motive.  Lindsay and her partner, Rich Conklin, are baffled by the fact that there are next to no clues at any of the scenes and there aren't any signs of forced entry.  The only clues that they can find to connect all of the crimes, besides the consistent MO of fire, are the books left at the scenes of the crimes with quotes written in Latin with the same handwriting.

In addition, Yuki Castellano is the prosecuting attorney in the case of the missing Michael Campion. He is the son of a very wealthy politician who was born with a genetic heart condition. His parents have always guarded him and he has basically lived in a bubble his entire life.  He disappeared out of the blue with no trace.  After a month, the San Francisco PD receive a credible anonymous tip.  Lindsay and Rich follow up on it and a young prostitute, Junie Moon, is charged for his murder.  She confessed to the crime, but now she is claiming Lindsay and Rich pressured her into a confession and it isn't true.  She originally told a remarkable story, but there are no clues to back up what she claimed.

The entire Michael Campion situation panned out exactly the way I thought it might in the end.  I don't want to give anything away, but it was a bit predictable given the lack of evidence.  The cases involving the fires and murders was far more difficult to crack and that is what really propelled this story forward.  The entire Women's Murder club came together to solve a devastating string of high profile murders.  The team caught a major break when the killers slipped up on what was supposed to be their grand finale.  The clues quickly piled up and Lindsay and Rich were hot on the trail.

Overall, this was a highly entertaining murder mystery.  I am enjoying the series and will definitely continue.  The author is hinting at a possible love triangle between Lindsay, Joe, and Rich, which I don't think is really necessary in this series.  I thought Lindsay was finally going to be happy now that Joe moved to San Francisco.  He proposed in the previous book, but she still hasn't accepted because she doesn't think she is ready.  They are now living together, but her work is definitely the priority in her life at the moment.  Throughout this book some events start to put things into perspective.  I hope she makes the right decisions moving forward in this series.
Posted by Jacque at 10:32 AM No comments: 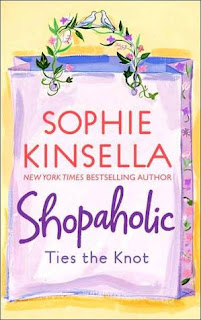 Becky's troubles will never cease to amaze me.  This time Becky isn't in financial trouble.  She simply can't say no to her mom or her soon to be mother-in-law who are both planning weddings for her on the exact same day on two different continents.  As multiple invitations are going out to many of the same guests and the arrangements are being made, Becky just hopes everything will sort itself out.

On one side of the spectrum she could have the wedding of the year that would rival any celebrity's.  On the other hand, she could have a more traditional ceremony at her parent's home with all of their family and friends.  When she finally makes a decision and takes a stand, she is confronted by the wedding planner from hell and discovers she may be in well over her head.

In addition, Luke is finally coming to terms with the fact that his mother may not be everything he had always hoped she would be.   He is struggling emotionally and has a bit of a breakdown.  As a result, Becky doesn't want to bother him with the "petty details" of their wedding troubles and keeps putting things off for a better time, but unfortunately time is running out.

These are very light and entertaining reads with quite a bit of humor mixed in.  I did feel like this one drug on a bit and wished they could have gotten things sorted out a bit sooner.  The constant stress Becky was under with the two weddings was a bit much after a while.  Overall, I gave it three stars.  I enjoyed the story, but it wasn't my favorite in the series.
Posted by Jacque at 3:16 PM No comments: 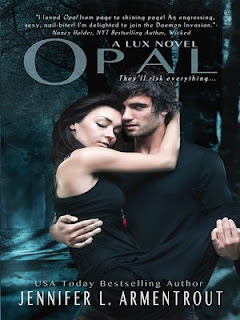 Opal is the third book in the Lux series.  Katy and Daemon have finally worked through their personal issues, but they have more than their share of family problems to deal with in this installment.

Daemon's twin brother Dawson is back, but he is far from the same person he was prior to his disappearance.  He is determined to free his girlfriend, Bethany, from their captors and must rely on the help of a very unreliable source.  I assumed we had seen the last of Blake, but he returns with a very unlikely proposition. He has a source that can get them into the facility holding his friend and Bethany. He realizes he has no chance of making it out alive on his own, so he solicits the help of Daemon and his family and friends. It is a very risky mission and one they do not take lightly.

The majority of the book involves training and planning for the mission.  Nobody trusts Blake, but they are forced to work with him on a daily basis, which keeps tensions high.  Dee will never forgive him for killing her boyfriend Adam.  As a result, there are a number of highly entertaining interactions between the two of them.

With a "family" as large as Daemon's it seems like privacy is an unknown concept. There were a few times Katy and Daemon were able to spend some quality time together in this book. I don't want to give anything away, but the prom night festivities were very sweet and well planned.  I definitely give Daemon props for that.

The ending was a complete shocker and not at all what I was expecting.  Considering there is another book in the series...I guess I shouldn't have been expecting a happily-ever-after at the end, but I NEVER saw that coming.  Fortunately I do not have to wait to find out what happens next :)

Overall, this was a great addition to the series.  There was plenty of tension, action, and romance to keep the pages flying.

Posted by Jacque at 3:30 PM No comments: