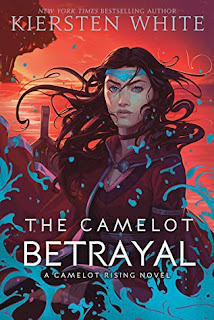 Goodreads Overview:
EVERYTHING IS AS IT SHOULD BE IN CAMELOT: King Arthur is expanding his kingdom’s influence with Queen Guinevere at his side. Yet every night, dreams of darkness and unknowable power plague her.Guinevere might have accepted her role, but she still cannot find a place for herself in all of it. The closer she gets to Brangien, pining for her lost love Isolde, Lancelot, fighting to prove her worth as Queen’s knight, and Arthur, everything to everyone and thus never quite enough for Guinevere–the more she realizes how empty she is. She has no sense of who she truly was before she was Guinevere. The more she tries to claim herself as queen, the more she wonders if Mordred was right: she doesn’t belong. She never will.When a rescue goes awry and results in the death of something precious, a devastated Guinevere returns to Camelot to find the greatest threat yet has arrived. Not in the form of the Dark Queen or an invading army, but in the form of the real Guinevere’s younger sister. Is her deception at an end? And who is she really deceiving–Camelot, or herself?
Review:
This is the second book in the Camelot Rising trilogy. I enjoyed the story, but I don't feel like a lot of progress was made in the plot or character development. Arthur is still dedicated to Camelot and I do not think there will ever be a real relationship between Guinevere and Arthur. The few times Mordred appeared, there was an undeniable spark and connection between him and Guinevere. I am hoping things will eventually move in that direction even though I know she feels a sense of obligation to protect Arthur and Camelot.
Lancelot wants to be just like all of Arthur's other knights, but as skilled as she is, she will never be one of the boys. She is assigned as Guinevere's knight and the two develop a friendship that eventually becomes strained. Guinevere can see that their relationship is impacting how Lancelot is viewed by her piers and tries to put some distance between them. Lancelot is one of the few people who knows the story of who Guinevere really is, so the two are able to speak freely with one another. They work together and take part in some quests along the way, which added the only real action and adventure to this story.
We do not learn any more about who Guinevere was before coming to Camelot or what has happened to Merlin. Without her memories, she feels like she is an imposter simply playing the role of Queen.  When the real Guinevere's sister arrives, she is convinced she is going to be outed. We do learn more about the real Guinevere from her sister, which I did find interesting.
The ending was a bit shocking, so I am looking forward to reading the final book to see what happens next. I'm not sure this story will have a happily ever after for everyone involved. Fortunately, The Excalibur Curse, is scheduled to be released December 7, 2021, so we will find out soon enough.
Posted by Jacque at 11:14 AM No comments: