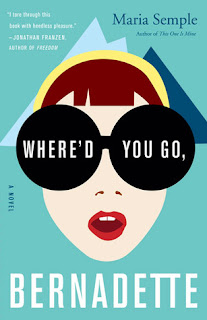 Goodreads Overview:
Bernadette Fox has vanished.When her daughter Bee claims a family trip to Antarctica as a reward for perfect grades, Bernadette, a fiercely intelligent shut-in, throws herself into preparations for the trip. But worn down by years of trying to live the Seattle life she never wanted, Ms. Fox is on the brink of a meltdown. And after a school fundraiser goes disastrously awry at her hands, she disappears, leaving her family to pick up the pieces--which is exactly what Bee does, weaving together an elaborate web of emails, invoices, and school memos that reveals a secret past Bernadette has been hiding for decades. Where'd You Go Bernadette is an ingenious and unabashedly entertaining novel about a family coming to terms with who they are and the power of a daughter's love for her mother.
Review:
This is a book that was immensely popular several years ago that I never got around to reading. It was also released as a movie, which I watched shortly after reading the book, so this will be a combined review of the book and movie.
Bernadette was an award winning architect before moving to Seattle with her husband Elgin. He took a job at Microsoft and is famous for a TED talk about a project he led that could turn someone's thoughts into action. For example, if you want to send an email, you can simply think what you want to say and it will type and send the message. After years of miscarriages they were finally blessed with a daughter, Bee, but she had some serious health problems as a child. Bernadette threw all of her energy into Bee's care and vowed never to build another house as long as Bee survived. This resulted in the family living in a dilapidated house, that she planned on fixing up, but never had the motivation to begin. She never adjusted to life in Seattle and became a recluse.
Bee asked if the family could take a trip to Antarctica to cash in on her parents' promise that she could have anything she wanted if she maintained perfect grades. Bernadette had severe anxiety about the trip, but could not tell her daughter no. A series of events eventually lead to Bernadette's disappearance. The majority of the story is told through emails back and forth between one of their neighbors and another mother at Bee's school, who happens to be Elgin's new administrative assistant. There are also a number of emails with a personal assistant that Bernadette was using that gives her perspective on the events that were taking place.
Overall, I really enjoyed the book and the movie, but I think Hollywood did the book a favor and removed some elements that were not necessary in my opinion.  The trip to Antarctica was not what the family had hoped for, but the result was far more than they ever could have anticipated. While there was a considerable amount of drama along the way, this was exactly what Bernadette needed to get her creative juices flowing and bring her out of funk she had been living in years. The scenery in the movie was absolutely stunning and I can see why someone would want to experience it first hand, but I was happy to enjoy it in the warmth of my home.
Posted by Jacque at 11:51 AM No comments: 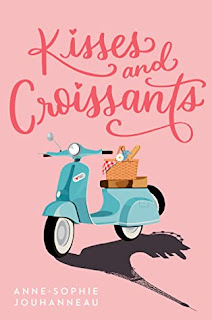 Goodreads Overview:
Seventeen-year-old Mia, an American girl at an elite summer ballet program, has six weeks to achieve her dreams: to snag an audition with one of the world’s best ballet companies. But there’s more to Paris than ballet—especially when a charming French boy, Louis, wants to be her tour guide—and the pair discover the city has a few mysteries up its sleeve.In the vein of romances like Love and Gelato, this is the perfect summer adventure for anyone looking to get swept away in the City of Love.
Review:
Mia has lived a life dedicated to ballet. Stories have been handed down through generations about an ancestor who was a prima ballerina in Paris. This woman was allegedly depicted in a painting by a famous artist, but only a few members of the family believe it is true. Mia is one of the believers and thinks it is her destiny to follow in her ancestor's footsteps.
While in Paris training for the summer, she has the opportunity to meet with some distant relatives to help uncover the truth behind the family mystery. With the help of Louis, a French boy she meets shortly after her arrival, she sets out on a quest to find the mysterious painting, but her time is limited and she refuses to put anything before her ballet training.
Much like Tiny Pretty Things, this book gives readers an in depth view of what it is like behind the scenes in the world of ballet. The training is grueling and the competition is fierce. One missed step could quite literally destroy a career.
I absolutely loved Mia and Louis and enjoyed exploring Paris with them. I was a bit shocked by some of the events that took place at the end of the book, but I was happy with how the epilogue tied up loose ends. Overall, I thoroughly enjoyed this YA contemporary romance. I haven't read Love and Gelato yet, but based upon this book's description, I guess I should move that book up my TBR list.
Posted by Jacque at 10:20 AM No comments: 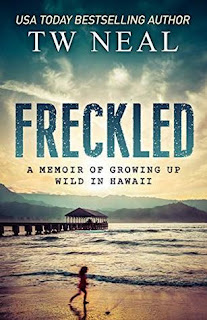 Born in 1965 to hippie surfer parents who just want to ride waves, use substances, and hide from society, red-headed Toby grows up as one of only a few hundred Caucasian “haole” people on the rugged, beautiful North Shore of Kauai, Hawaii.

“I wish I could slow down time, turn every moment to honey and watch it drip by.” Told from the immersive, first-person view of a child experiencing turbulent times as they occur, Freckled will take you on a journey you won’t soon forget as Toby catches an octopus with her bare hands to feed the family, careens on her first bike down a rugged dirt trail deep in the jungle, and makes money by selling magic mushrooms to a drug dealer. Living in tents and off the land without electricity or communication with the outside world, Toby escapes into reading and imagination to deal with racial harassment and indifferent parenting.

Toby’s idealistic parents, breaking away from high achieving families, struggle with mental health and addiction issues as they try to live according to their own rules. Despite the hardship and deprivations of life on Kauai, they return again and again to an island whose hold on them is more powerful than any drug, as sensitive and resilient Toby clings to a dream of academic achievement and a “normal” life.

This was Preston's book club selection in his high school English class. Author Toby Neal is known for her mysteries and thrillers. This is her first attempt at nonfiction and she hit it out of the park. I haven't read any of her other novels, but I will definitely give them a try after reading Freckled.

Freckled is Toby's memoir about growing up in Hawaii in the 60's and 70's. Her parents were hippie surfers who were content living well below the poverty level in order to enjoy the sun and surf in Kauai. Discrimination against non-native white people, referred to as "haoles",  was worse than anything I have ever witnessed on the mainland.

Toby shares her experiences of what it was like living in a homeless tent community or out of their van at various times during her childhood. The few times her father got a decent paying job that provided an actual house to live in, he found the work to be more than he could handle. He wasn't used to working 40 hours a week and simple manual labor was too much for him. He split the work up between himself, his wife, and children so he only had to work a fraction of the time and could relax, drink beer, and surf. Her parents often neglected the children and left Toby to take care of the younger ones.

What is inspiring about this story is how Toby was able to overcome her upbringing. She was always an avid reader and did well in school. The library was one of the few safe places she could go and the books provided an escape that she desperately needed. She refused to follow in her parents footsteps and always wanted more for herself. She was not afraid to work hard and knew that getting off the island, and obtaining a college degree, was her only chance of breaking the cycle and achieving her goals in life.

This book not only tells Toby's story, but shares a first had account of the discrimination on the islands. Everyone thinks of Hawaii as paradise, but that was far from the case for non-natives that wanted to live there. We are all too familiar with the stories of discrimination against people of color and initiatives like the Black Lives Matter campaign, but I had never heard of the reverse discrimination in Hawaii. This book is a great resource for schools and communities to educate students and residents about the effects of discrimination and to hopefully prevent the past from repeating itself in the future.