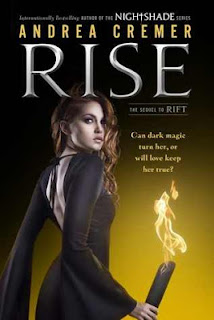 When I started reading this book I thought it was the second book in a prequel TRILOGY.  I have since discovered that it is a duology and the series has come to a close.

Rift left off with a very action packed last third of the book and I assumed the momentum would continue throughout Rise.  Unfortunately, there was some action at the very beginning, but then there was A LOT more discovery, world building, and tension before we received another dose of excitement at the very end.  While I enjoyed learning about the history of the Keepers and Searchers and what led up to the events in the Nightshade series, there wasn't enough here to hold my attention for an extended period of time.

The relationship between Ember and Borrow was a tease most of the book, which became frustrating as the chapters went on.  I realize the book is set in the 1400s and times were different than they are today, but REALLY?

Rise had the feel of a middle book.  Maybe the intent was simply to bridge the gap between Rift and Nightshade.  If that is the case, it was very well done.  If this was supposed to provide the type of closure for these characters that we received in Bloodrose, it fell short.  Don't get me wrong...I think Andrea is an excellent writer.  The tale is eloquently told, but it lacked the spark that her other books have had.

The rise to power of Eira and Bosque and their developing relationship was one of the highlights of this book.  We are also able to see how the Guardians came to be, which was a fascinating element as well.  Overall, I think any fan of the Nightshade series will enjoy the history this book provides.  I just wish I could have read it before Nightshade.  I would have had a better understanding of the magical elements the books contain and I could have ended the series on a high note.
Posted by Jacque at 2:41 PM No comments: Katarina Bishop (Kat) is the fifteen year old daughter of a professional thief.  She has grown up in the business and has assisted in numerous jobs since a very young age.  She decided to get an education and live a normal life where everything is planned out for her.  At the beginning of the book she is attending the Colgan School, a very prestigious boarding school, and is doing just that.  This, however, was short lived.  Her friends set her up and got her expelled from school because they needed her help with a job that hit VERY close to home for Kat.
A  wealthy mob type man is accusing Kat's father of stealing five valuable paintings from his home.  The problem is, her Dad says he didn't do it and doesn't know who did.  If he doesn't return the paintings in 2 weeks there will be serious consequences.
This is where we meet W.W. Hale the Fifth.  A sixteen-year-old billionaire who is anything but pretentious and is now on my fictional boyfriend list.  Hale and Kat met under very unusual circumstances and have been working together ever since.  He convinces Kat to come out of retirement to help find and return the paintings for her father.
This book was very unique.  I have never read anything about thieves and found it fascinating.  The characters were very enjoyable and there were some EXTREMELY funny lines scattered throughout the book.  I actually laughed out loud while reading at my son's swim practice and made a complete spectacle of myself.  This is nothing new for me, but it is the sign of a highly entertaining book.
There were a few places in the book where I thought the flow was a little off.  One paragraph ended and the next picked up with a completely new scene.  I had to reread a few paragraphs once I discovered there had been a transition just to put everything into perspective.  This is a very minor negative that was easy to overlook once I was engrossed in the story.
I will definitely read the second book in this series and I am REALLY looking forward to meeting Ally Carter at this year's RT Convention.  I picked up a hard copy of one of her Gallagher Girls books and plan on getting her latest Heist Society book, Perfect Scoundrels, for her to sign as well.
Posted by Jacque at 9:48 AM 4 comments:

Body of Evidence by Patricia Cornwell 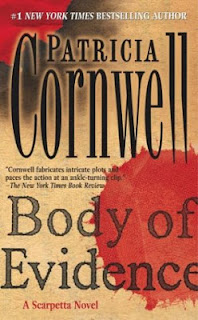 I read a couple of the books further along in this series several years ago.  It became quite evident that the main characters evolve throughout the series, so I decided to start at the beginning.

In 2011 I read the first book in the series, Postmortem.  We were introduced to Kay Scarpetta, who is the Chief Medical Examiner in Richmond, VA and Pete Marino who is a homicide detective.  Benton Wesley, a profiler from the FBI, also assisted with the case.  All three of these characters return in Body of Evidence to help solve the brutal murder of Beryl Madison, a local author.

Shortly after the murder we are introduced to Mark James, who was Kay's boyfriend in law school.  They have not seen or corresponded with each other in years, so Kay found it extremely unusual when he surfaced out of the blue.  Another murder is eventually committed that relates to the Beryl Madison case and then Kay starts receiving threatening phone calls.  She can't figure out Mark's motives and begins to think he may be involved in the murders.

This book was released in 1991, so there are a lot of old school references in terms of technology but the story is still relevant.  Some of Marino's tactless comments, for lack of a better word, will likely offend some readers.  I felt that Cornwell was probably being very realistic with the conversations that would have occurred between police officers at the time, but I cannot see these comments still being made today.

The book is fast paced and contains a lot of medical and scientific details.  As a nurse I find this fascinating, but it may overwhelm some readers.  It never ceases to amaze me how this investigative team is able to piece all of the clues together.  There are so many small details which eventually reveal the big picture.

If you enjoy murder mysteries this is a very entertaining series up to this point.  There are currently 20 Kay Scarpetta books available, which seems a bit daunting to me.  I do plan on reading at least the third book in this series as part of my Top Ten Books I Resolve to Read in 2013 Challenge.